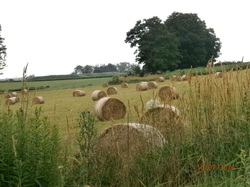 A field of stacked hay on Carin Road
I love Oxford County! The place that I have called home for 30. years. The centre of the universe. Well Woodstock, Ontario is nestled between Highways #401 and #403, only an hour and half jaunt east to Toronto, Ontario and a two-hour drive west to Windsor, Ontario. Oxford County is central to most major cities. Maybe that is why many businesses and functions are built and held here for this reason.  With its rolling hills where cows, lambs and even emu roam free to graze, to the rich fertile farmlands to the pungent aroma of manure. No wonder Oxford County is the agricultural belt of Southwestern Ontario and the diary capital of Canada. (Both family and friends visiting me get their pictures taken with the Snow Countess.)

When I first arrived in Woodstock in March 1992, I was surprised but pleased that there were a lot of cultural attractions available to attend. With my love for music, I thoroughly enjoyed attending concerts put on by the Woodstock Strings, listening to the Woodstock Choralaires and the Woodstock Fanshaw Singers and enjoying plays at Theatre Woodstock.  I soon got involved in numerous clubs and organizations from the Woodstock Cycling Club (WCC) to the Woodstock Field Naturalists' Club (WFNC), no not a nudist colony but nature, birds and flowers. That is why Woodstock’s slogan is known as “a great place to shop, dine, work and play.”

With numerous events and festivals throughout Oxford County, there is always someplace to go and something to do. “Oxford County, our rural roots are showing.”

(Picture taken by Heather A. Rennalls)
From March 2013 to December 2014 I was employed at Oxford Media Group in Woodstock, Ontario as a Freelance Writer and Photographer where I wrote an article and took pictures of the history of the Township of Norwich. My first assignment was an article entitled “The Otterville Falls” printed in the Spring/Summer 2013 Edition of Township Connections - The Community Magazine for the Township of Norwich. Click the "Button Text" below to read the article.
The Otterville Falls
I was disheartened to learn that Jeff Culp had past on October 10, 2021. I was fortunate to visit with him in September. Jeff had health issues for sometime. He wore many hats being involved in housing, radio and journalism. In 1994, Jeff owned and operated Oxford Media Group, a graphic and web design company which focused on website design and maintenance, printing and Event Management.  Jeff had hired me as a Freelance Journalist in 2013 where I remained until the company folded in 2014. Jeff was also the Editor for What's On Woodstock Magazine in which I wrote a few articles on the Black History in Oxford County for Black History Month.

​I had met Jeff ahile bakc and
Like most Writers I was fortunate to meet Jeff over the years, to

Quote: "It's Never Too Late to Change Your Life." ~ Yoga Guru Bikram Choudury ~