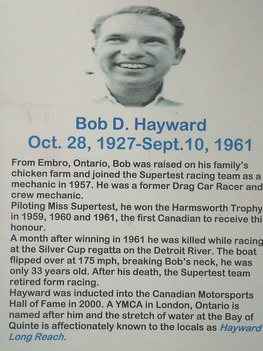 The Story Behind the Story

My interest in Miss Supertest III is quite an intriguing one. It all started in June 2011. As a member of the Norwich Municipal Heritage Committee, I attended the Ontario Heritage Conference in Cobourg, Ontario from June 3 to 5, 2011.  I took Peter Lockyer's workshop Making History: The Economics of Heritage. With my love of writing and journalism, I was pleased to hear this former CBC Journalist speak. While watching one of his films, a snippet of his work and website History Lives Here Inc., I was puzzled but intrigued to see a picture of Miss Supertest III. I wondered "what is a boat in the Ingersoll Cheese & Agricultural Museum doing in a film by Peter Lockyer?" Peter then explained how the Miss Supertest was going to be on loan in Prince Edward County, where he lives, to attend a three-day celebration in August to launch a commemorative stamp honouring the boat.

After his presentation, I introduced myself to Peter Lockyer and asked if he would consider coming to Oxford County to do a presentation. He would. Then I inquired more about Miss Supertest III. Peter informed me how Miss Supertest III would be returning to Picton, Ontario after fifty years and how he was launching his documentary on the both the boat and the Embro chicken farmer Bob Hayward who drove her. He invited me down to attend this historical event. An offer I could not refuse and one which would change my life for the love of hydroplanes. With my friend and follow historian Marie Avey, we drove the two hour trek to Picton, Ontario and stayed at Peter Lockyer’s cottage.

On August 8, 2011 Marie and I attended the Loch Sloy Business Park, Hanger #4, in Picton, Ontario for the Miss Supertest III Stamp Unveiling Ceremony. While checking out the numerous displays, hydroplanes, vintage boats, memorabilia and vendor booths, I stopped to browse a book. I noticed the name Guy Lombardo and thought this odd. I did not know that this Canadian musician and famed bandleader from London, Ontario, who had a museum named after him, was a powerboat racer.  Author of Roostertail: The Miss Supertest Story John Kelly explained that Guy Lombard was a great racer who won twenty of twenty-one hydroplane races with his boats Tempo VI and Tempo VII.  He also is indicted into the Canadian Motorsport Hall of Fame. Who knew?

I then stopped by Rick and Chris Fralick’s booth, Fralick Boats. (I blame Rick Fralick for becoming a groupie.) While speaking to Rick he mentioned that Woodstock held hydroplane races for years. As a historian I was embarrassed that I never knew this. Rick went on to explain that over 100 participants would attend the Woodstock International Regatta held at Pittock Dam. In 1982 the Canadian Boating Federation wanted to hold the National Powerboat Championships in Woodstock which would have attracted about 5,000 spectators and over 300 racers to the event. However, a petition against the race pressured Woodstock Council not to proceed.

Right then and there after hearing this information, I had an obsession to bring hydroplane racing back to Woodstock. In the words of Paul Harvey "This is the rest of the story"... 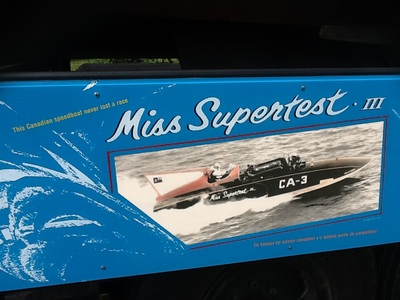 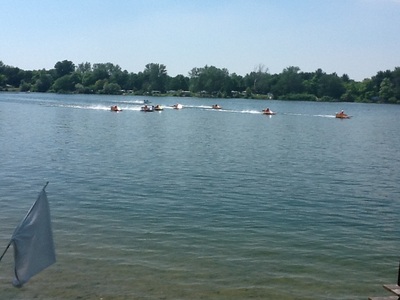 Oxford County has important ties to the history celebrated at this epic event held August 6th to 8th, 2011 in Picton, Ontario. Miss Supertest III is a Canadian hydroplane boat that achieved international acclaim and honors during the 1950s and 1960s by winning the prestigious Canadian hydroplane boat three times. This weekend recognized and celebrated the history of this and other Ontario hydroplane racing successes... (Hit the "Button Text" to continue reading.)
Miss Supertest III
Miss Supertest III Stamp Unveiling Ceremony, August 8, 2011, Picton, Ontario
Since 2011, I have been following the restoration of the Canadian ionic hydroplane Miss Supertest III. This famous watercraft helped put both Canada and Ingersoll in the international spotlight when the driver, Embro chicken farmer Bob Hayward, won the prestigious international Harmsworth Trophy in 1959, 1960 and 1961.
​
Harold & Lorna: The Premiere

Friday September 14, 2012, Harry Wilson premiered his new docudrama entitled “Harold & Lorna World Water Speed Champions” at the  Ingersoll Theater of Performing Arts (ITOPA) in Ingersoll. It was full circle of the long legacy about the almost forgotten story of his parents, Harold and Lorna Wilson. Most people may know about Miss Supertest III and her connection to the Thompson family from London Ontario the owners of the petroleum company stations of the same name. (Click the Button below to read more.)
Harold & Lorna:
Gallery of pictures from Harold & Lorna: The Premiere, Sept. 14, 2012 Ingersoll, Ontario

﻿"The Toronto Outboard Racing Club Inc. (﻿TORC﻿) was established in 1952 and is a non-profit organization devoted to those people with an interest in boat racing.  Our membership includes outboard racers, OPC racers, inboard racers, boat builders, antique boat/motor collectors, marine dealers and general boating enthusiasts. We also welcome marine accessory suppliers, manufacturers and distributors to the marine industry.  Members reside throughout North America, but the majority live between Ottawa and Windsor, Ontario." (From Toronto Outboard Racing Club website.)
Quote: “He who is not courageous enough to take risks will accomplish nothing in life.”
​ ~ Muhammad Ali ~